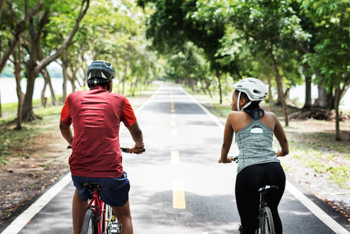 Your Rights as a Cyclist in Massachusetts

As a cyclist, you can ride your bike on any public road, street, or bikeway in Massachusetts. Bicyclists have a right to use all public ways in the state except for limited access or express state highways with signs posted that prohibit bicycles. You can also ride your bike on sidewalks outside of business districts as long as there are no local ordinances that prohibit you from doing so.

When Near Cyclists, Massachusetts Motorists are Required to:

Your Responsibilities as a Cyclist in Massachusetts: The Bike Laws You Need To Know

As a bicyclist in Massachusetts, you must follow all of the rules of the road, including riding your bike appropriately on streets, avenues, traffic rotaries, intersections, and more. Cyclists must follow all the same basic traffic laws and regulations that apply to motor vehicle drivers.

There may be additional rules and regulations in individual cities, such as Cambridge’s Bicycle Road Rules, but the following restrictions apply to the entire state.

Anytime there is a bike crash that results in an injury or property damage over $100, you are required by Massachusetts state law to report the crash to the police in the town or city where the bike crash occurred. If you are injured in a bike accident, you will want to contact an experienced bike accident attorney as soon as possible. While we hope you are never involved in a bike accident, there are also a couple of different forms of insurance we recommend for cyclists in event of a bike crash

If you were injured in a bicycle or e-bike accident, Spada Law Group’s injury attorneys can work to protect your legal rights. We have three offices and proudly serve the entire state with the ability to meet with you remotely from the comfort of your own home. Contact us for a free consultation so we can learn more about your bike or e-bike injury case and see how we can help you get the recovery you deserve after your accident.