God Has Insurance, Too: Woman Injured In Outdoor COVID Church Service Gets $200,000+ Settlement With Help of Chelsea Injury Attorney

Susan* was at an outdoor church service in a parking lot when a car crashed into her and caused significant injuries to her head and legs in June 2020.

Church services were held outside in Susan’s local church’s parking lot at the time, due to the COVID pandemic. The parking lot was transformed into a makeshift church sanctuary with folding chairs set up. People parked their cars around the parking lot's perimeter, surrounding the area where the church service was held.

There was a system in place for safely exiting the church service, which included clearing out all attendees before cars were allowed to move and exit the parking lot.

One man, however, chose to leave the service early the summer day Susan was injured. He got into his car and began navigating through the parking lot. Then, the man suffered a medical emergency while driving. He became unconscious and his car crashed into several people sitting in folding chairs at the service. Susan was one of them.

Susan, 72 years old at the time of the accident, was rushed to a Boston hospital in an ambulance. She had serious injuries to her head and legs. 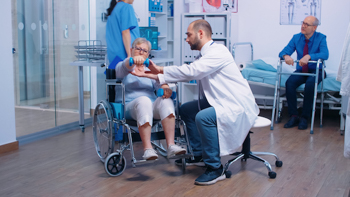 Once stabilized, Susan’s head laceration was stapled and she had several diagnostic tests done. Imaging revealed she had fractures in both of her legs. She then required surgery on both legs, including metal rods, plates and screws inserted.

During the procedures, Susan was tachycardic and hypoxic, which led to discovering additional injuries. When tachycardic, a person’s heart rate becomes over 100 beats per minute. When hypoxic, a person’s blood oxygen levels become lower than normal.

Susan was admitted to the surgical intensive care unit (ICU), where it was found she had pulmonary emboli in both her right leg and lungs. A pulmonary embolism is a blood clot that develops in a blood vessel. It’s very common for them to first develop in a leg, and then it travels to a lung artery where it can suddenly block blood flow.

For four days following the car crash, Susan was in the hospital’s ICU. She stayed at the hospital for another two weeks after being released from the ICU. She began physical therapy while at the hospital. After her two-week hospital stay, she was transferred to a rehabilitation hospital because she wasn’t well enough to return to her second-floor walk-up apartment.

After a week in the rehab hospital, Susan was discharged to continue her recovery at her daughter’s home. She was in the hospital for nearly an entire month.

Her healing journey continued after leaving the hospital. Susan went to outpatient physical therapy and continued to be cared for by a team of doctors including an orthopedic doctor, her primary care doctor, and a cardiologist.

It wasn’t until November – 5 months after the tragic accident –  that Susan was able to take short walks.

You have rights when you’ve been injured due to negligence. In a case like this, there are multiple liable parties involved. Here, the people responsible for Susan’s injuries included the driver of the car, as well as the church and employees and volunteers at the church.

We sued the driver who caused the accident, but he only had a minimal insurance policy.

Spada Law Group then also sued the church for failing to protect their service attendees from very foreseeable harm involved when cars are allowed to drive while people are sitting in the parking lot. The church’s insurance company told us we were only entitled to $20,000 in damages for Susan’s injuries because of the charitable cap law in Massachusetts.

The charitable cap is a state law designed to help protect nonprofit organizations in Massachusetts by limiting their liability for civil wrongs such as injuries that occur on their property. It limits the organization’s liability for damages to an individual to a maximum of only $20,000.

There are some ways skilled injury attorneys can get around this low charitable cap limit, however.

In this case, we additionally pursued a claim against the church’s employees and volunteers who were responsible for ensuring that people would not move cars during the service. We settled Susan’s case for more than 10x the $20,000 charitable cap and ALL of the settlement money came from the insurance company, NOT the church or its employees or volunteers.

Of course, in this tragic case, this is not what happened. Due to the negligence of employees and volunteers, we fought for Susan’s rights and settled her case for more than $200,000, so she had the money she needed to pay her medical bills and prioritize her recovery. You see, the church’s insurance policy also covered the employees and volunteers, that is why they paid more than the $20,000 cap.

In this case, there were other people injured in this accident besides Susan who were represented by other attorneys. When the insurance company tried to say we were only entitled to the $20,000 cap, these other attorneys were ready to accept that explanation, but we were not. We explained to the other attorneys that there was a way around the cap and that they should allow us to make our case before accepting the small amount the insurance company was offering. Thankfully for their clients, they listened to us and their clients also obtained more than the cap amount.

*Susan is not the client’s name and has been changed for privacy.

Were you Injured due to a Charity or Nonprofit’s Negligence? Massachusetts Injury Lawyer Offers Free Consultations

If you were injured due to the negligence of a nonprofit, we can help.

It is possible to recover more than the charitable cap in Massachusetts when you’ve been injured, but you need to hire an experienced injury lawyer.

We have offices in Chelsea, Peabody, and Worcester, but we proudly serve the entire state and can meet with you remotely from the comfort of your own home. Contact us for a free consultation to see how we can help you get the recovery you deserve after your injury. As personal injury lawyers, you never pay us a penny until we win your case.