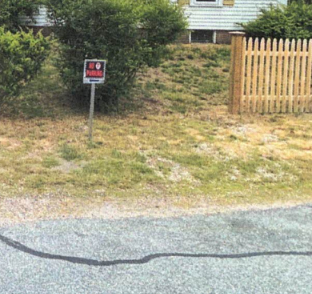 What started as a beautiful Friday summer night on the beach in Boston’s North Shore quickly turned catastrophic when a 15-year-old high school student was injured.

Mary*, a high school sophomore, was at the beach with friends until they jogged home together around 9 pm. The route included a poorly-lit, narrow neighborhood street with no sidewalks. Because it was a narrow road, cars parked partially on the right-hand side of the street and partially on the grass of lawns.

When Mary and her friends turned onto the street, a car (half in grass, half on the road) was in the way. Mary jogged around the car on the right-hand side in the grass. In the grass, however, were “no parking” signs that Mary couldn’t see because it was dark, and the metal-edged sign was facing the road so that only the razor-thin edges of the sheet metal signs were facing Mary.

Because Mary could not see the sign, she ran straight into the sharp metal edge of the sign. The sign caused a 9-inch cut on her left thigh that cut deep down: all the way down to her femur. It was so dark Mary didn't even know how bad the cut was until a friend shined a light from a phone on it.

Once they saw the injury, a friend wrapped Mary’s leg in a sweatshirt, and someone called her sister to the scene to rush her to the hospital.

“The Girl With The Scar”: Injuries Suffered by Hopeful College Soccer Player

Doctors described Mary's injury as a “large complex laceration,” because the cut from the sign went through tissue and her quadriceps muscle in her thigh. Due to the severity of the injury, a trauma surgeon was brought in to perform her surgery.

Mary’s surgical repair of her thigh required stitches in five different tissue levels, beginning with her sliced open quad muscle. After the surgery, it was recommended that Mary stay overnight. However, this was during the COVID-19 pandemic, so she was sent home with her parents instead.

Mary began gradually resuming physical activities weeks after surgery but developed pain and spasms in her quad muscle, weakness, poor balance, and a strange way of walking. She began going to physical therapy for strengthening and rehabilitation.

She attended physical therapy until the end of July and soon was able to run short distances and start practicing for the upcoming soccer season. In total, her medical bills amounted to nearly $13,500.

As an award-winning varsity soccer player, Mary had realistic expectations of playing college soccer. Thankfully, Mary was able to return to sports but has a significant scar deformity. Her scar affected her self-perception, as disfiguring injuries usually do. When she attended college showcase events with college scouts looking to recruit soccer players, her mom asked her what she would do to “stand out.” Most girls will wear a bright color, a special scrunchy, hairstyle, or something of that sort.

“I’m the girl with the scar,” Mary said, explaining she didn’t need to do anything else to stand out.

Her scar is about 10 inches long, ½ inch wide, and runs from her upper-mid thigh all the way to the top of her knee. For the rest of her life, Mary will have to think about what she wears because of her scar.

How Spada Law Group Helped Mary Recover $200,000 for Her Injuries

The Homeowner’s insurance company was initially adamant that Mary’s injuries were solely her own fault and resisted any argument to the contrary.  Spada Law Group however was able to persuade the insurance company that should the case go to court, Mary’s case had the law and facts on her side. Attorney Leb Spada convinced the insurance company to participate in mediation where he successfully negotiated a $200,000 settlement agreement for Mary. She never had to step foot in a courtroom to resolve her case. Initially, the insurance company offered a mere $75,000 to settle her claim.

Because the sign was in someone’s front yard, Spada’s personal injury lawyers were able to make their claim against the property owner’s home insurance policy. During the negotiation period, Spada’s attorneys were able to demonstrate to the insurance company exactly how they would be able to persuade a jury to find for Mary if they went to trial.

This was a negligence case, and Spada’s attorneys were able to show that:

It’s important to know that when you’ve been injured, you’re entitled to more than only money to cover your medical bills. You are also entitled to damages for future pain and suffering, including the discomfort and reality of disfigurement, as was the case here, with such a large scar that Mary will have to live with for the rest of her life. Because of all of these factors, Spada Law got Mary a great settlement on her case.

Were you Injured in a Massachusetts Neighborhood as a Pedestrian? Call or Text us for a FREE consultation today.

Sometimes people, especially pedestrians, are unaware they have a personal injury case. Pedestrians also often don’t realize the possibility of suing a homeowner’s insurance policy to get the money they need and deserve to recover fully from their injuries.

If you’ve been injured as a pedestrian, even in your neighborhood, give us a call.

Consulting with an injury attorney is the best way to find out if your injuries may be worth damages so that you can recover.

*Mary is not the client’s real name.