When a Dog Bites, His Owner Is Responsible for Compensating the Victim

As the most popular pet in the U.S., dogs are everywhere. You might see them being walked around your neighborhood, sitting in the passenger seat of the car next to you at a stoplight, and even in your own backyard. In fact, one out of every three households in the U.S. has at least one pet dog. But, even if you are a dog owner and dog lover yourself, when a dog bites you or your child, that dog’s owner should be held responsible for the harm it has caused. Massachusetts has one of the strictest dog bite laws in the country, particularly when a child is bitten, and our personal injury attorneys can help you make sure the law is applied when you or a family member is attacked by a dog.

Dog Bites Are a Common Occurrence

According to the Centers for Disease Control and Prevention (CDC), 4.5 million people are bitten by dogs every year, and 800,000 of them require medical attention. At least half of all dog bite victims are children. Any size or breed of dog can attack and bite a person. The American Veterinary Medical Association notes that it is not the dog’s breed that makes it aggressive, but the way it has been raised and treated by people. Dogs that are not familiar with or comfortable around young children may be uncharacteristically aggressive or defensive when coming in contact with them.

Dog bite laws vary from state to state, but Massachusetts has one of the toughest laws in the country. The law states that if a dog harms you, the dog’s owner is liable for any damage the dog causes. It doesn’t matter if the dog has ever bitten anyone or shown aggression before. However, if the dog bite victim was trespassing on the dog owner’s property or teasing or abusing the dog, the owner is absolved of responsibility. The one exception to this rule is for children under the age of seven. Massachusetts law holds that young children are not responsible for their behavior towards the dog and that it is up to the dog’s owner to control the animal around children.

Clearly, a large, aggressive dog can do a lot of damage, but even small dogs can cause a great deal of harm. Even if you are not bitten, you could be knocked down by a dog and suffer injuries. In Massachusetts, owners are liable for any harm a dog causes, not just for bite injuries. Some common injuries caused by dogs include the following:

According to the CDC, dogs carry dangerous bacteria in their mouths that can harm humans, including methicillin-resistant Staphylococcus aureus (MRSA), which is resistant to antibiotics and can cause a life-threatening infection, and Clostridium tetani, which causes tetanus. An average of 34 people are killed by dogs each year, according to statistics tracked by DogsBite.org.

We Are Experienced Dog Bite Attorneys

If you live in the Greater Boston area and were attacked by a dog, talk to the personal injury attorneys in our Chelsea or Salem office about your injuries. We know the law and will fight to get you the compensation you need to recover from your injuries. We understand that you may be reluctant to sue a friend or neighbor, but it is important to realize that dog owners usually have coverage for these kinds of injuries under their homeowner’s insurance policies. Dog bite treatments—including emergency room visits, plastic surgery, and ongoing counseling for trauma—are expensive and you shouldn't have to pay for this out of your own pocket. Schedule a free consultation with our attorneys if a dog injured you or your child. We are here for you! 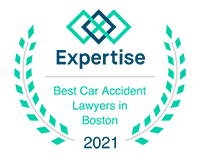