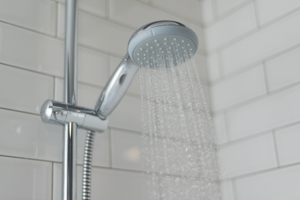 There’s nothing like stepping into a warm, steamy shower on a Massachusetts winter day to warm up. One day in late February, Harry* got ready to take a shower in his two-bedroom condo. Like many of us, Harry turned the handle on the shower to the usual position, tested the water with his hand, and stepped into the shower just like he had done for years.

The next thing Harry knows, he wakes up in Mass General Hospital’s intensive care burn unit.

After Harry got into the shower, extremely hot water suddenly came through the shower. When the water hit Harry’s back, he flinched, slipped, and fell. He hit his head and was knocked unconscious.

He woke up at the hospital with third-degree burns on his back, feet, and toes. For eight years, until the spring of 2022, Harry and Spada Law Group pursued justice for his injuries.

Harry suffered life-threatening and catastrophic third-degree burns on his feet and back that required multiple surgical procedures, skin grafts, and skilled nursing for months. Third-degree burns are the worst burn injury classification, and they can even cause damage to muscles, tendons, and bones. They can also cause extensive nerve damage.

Throughout multiple surgeries, surgeons removed large portions of skin from other parts of Harry’s body and grafted them onto his burn sites. Harry spent more than six weeks in hospital treatment, rehab, and with skilled nursing care.

Harry’s permanent impairments from the injury significantly limit his ability to function in everyday life. To date, he still suffers chronic pain and permanent dysfunction.

From the time of his injury until we won his trial, the burns on Harry’s feet caused his toes to permanently constrict and curl down, making walking difficult and painful. He used to enjoy long, daily walks. Now, Harry struggles to walk and must use a cane. His condition is not expected to improve.

In the condo building Harry lived in, a centrally controlled boiler room in the building’s basement serviced all the hot water. The room was locked and only the condo’s management company had access to the boiler room.

A few things went wrong, and as a direct result, Harry’s injuries were caused by the condo management company’s negligence and breach of contract.

​​The inspector characterized this water temperature as “a very dangerous situation [that] needs to be repaired immediately.” There are only two explanations for what would cause the water to reach such high temperatures.

An inspection also revealed that the mixing valves were very corroded. Corrosion of the valves that mix the water temperature prevents the valves from mixing the right amounts of hot and cold water together and can result in illegal temperature extremes, as Harry experienced. The condo management company was responsible for each of these factors.

A $5 Million Verdict: How The Case Was Won

The lawyers from Spada Law Group presented the law and evidence of Harry’s case at trial for 10 days. We successfully proved to the jury that the condo management was responsible for Harry’s catastrophic burns and life-debilitating injuries.

Our team showed the jury how the condo management company failed to fulfill its contractual and professional duties by not ensuring that the water temperatures were set to the proper limits and by not maintaining the equipment to prevent corrosion (or by replacing it when it was obviously damaged). This failure is exactly what created the dangers that ended up harming Harry.

In his testimony, a man who’d worked with the condo management agency for more than 20 years said that he had never even read ANY of the state’s building or plumbing codes, even though it’s his job to follow them. The worker even specifically said that he had never read any government regulation from any source concerning water temperatures coming out of residential showers.

Had the condo management company actually done its job, Harry would never have suffered the burn injuries in the shower.

Harry also testified at trial. He slowly walked to the witness stand, struggled to get into the chair, and explained to the jury how much the painful injury and disfigurement had changed his life.

After nine days of testimony, including testimony from expert witnesses we brought in to help explain Harry’s complicated medical issues, the jury took only three hours to return a verdict in Harry’s favor for $5,000,000.

Have You Ever Suffered A Severe Burn Injury? Call or Text Today For A FREE Consultation with our Massachusetts Injury Lawyers

If you’ve suffered a severe burn injury, reach out to find out how our expert personal injury attorneys can help.

*Harry is not our client's real name.