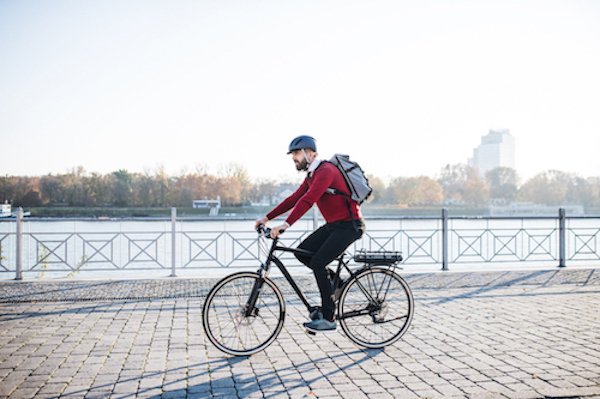 In the past few years, e-bike sales have boomed nationwide. Most electric-assist bicycles (e-bikes) look like regular bicycles but are capable of much more. All types of people enjoy e-bikes, particularly people looking for an accessible way to exercise, people who run everyday errands and carry heavy loads or children, and people who commute to work or prefer biking over car transportation. E-bikes help people ride more often, ride faster, and ride farther.

Approximately 260,000 e-bikes are sold each year, according to MassBike, and they’re the fastest-growing segment of bicycle sales. With e-bikes expanding in popularity in Boston, we’re likely to see some changes in Massachusetts e-bike laws soon − especially because most current state laws governing e-bikes were created with scooters, mopeds, and other modes of transportation in mind.

Pros of E-bikes in Boston

There are many things to love about e-bikes in Massachusetts and beyond. We address some of the main perks of e-bikes here.

Giving the extra boost for fitness

E-bikes can sense when a rider needs an extra boost - whether it’s helping a rider bike into wind, accelerating after a stop, or getting up a steep hill. Largely because of this, there is a lower barrier of entry for someone to ride an e-bike, as it’s less strenuous on your body and a less intense way to work cardiovascular exercise into your regimen.

Taking to the roads and the trials

E-bikes are a great option not only for commuting on Boston’s streets but also for hitting all the great bike trails in the city. A study completed by the University of Tennessee found e-bikes can be safely operated on bike paths, reports MassBike. Overall, e-bikers were just as safe as traditional cyclists and they traveled at similar speeds as traditional cyclists. While e-bikes can easily go 20mph or faster, the study found e-bike riders on average only biked about 2mph faster on public roads and streets, but when on bike paths the riders usually biked 1mph slower than a traditional cyclist.

E-bikes are a great form of exercise for someone who has arthritis or is rehabbing from a surgery or injury. Because of the pedal-assist and being able to choose how much or little assistance you want, an e-bike can be a fantastic way to exercise without putting too much strain on your body’s joints and muscles.

A possible tax break for e-bikes

A potential nationwide e-bike perk is that there is a bill in the House of Representatives for an E-BIKE Act: Electric Bicycle Incentive Kickstart for the Environment Act. If passed, the act would allow for a refundable tax credit of up to 30% when someone purchases a qualifying electric bike.

Cons of E-bikes in Boston and Massachusetts

While there are many incredible benefits of e-bikes, there are also some risks. We certainly do not want to dissuade anyone from getting and enjoying an e-bike, but there are some differences to be aware of before purchasing an e-bike.

While you may never forget how to ride a bicycle after learning, there is a learning curve to figuring out how to ride an e-bike - especially if you are not currently an avid or regular cyclist. While many people buying e-bikes are already avid cyclists in Massachusetts, many others who do not consider themselves cyclists are also buying e-bikes. This means many e-bike riders are less experienced biking on the roads to begin with, and now they have a bike that can reach high speeds quite easily. The less conditioned you are to biking on the road and the faster you ride can increase the chances for accidents. It’s important to take time to get comfortable on your e-bike, riding in the streets, and to monitor your speed if you’re a new rider.

Many drivers will not know the difference between a bicycle and an e-bike visually, so they may have no idea how fast you’re going. Because of the assist function of an e-bike, a rider might be more upright as they ride, or might have a much slower pedaling cadence than a typical cyclist. Sitting upright and slow-moving feet might prompt a driver to think you’re not biking very quickly. This can be dangerous. A driver may see you approaching as they prepare to make a right turn, and they might go to make that turn not realizing you’ve already caught up to them. Now, because the driver misjudged your speed, you may be at risk of being hit as they turn. As an e-bike rider, you have to be very aware of your surroundings and recognize that drivers might not know what to expect and might not gauge your speed or distance as well due to different visual signals.

Similar to the above risks, many people without much cycling experience in Boston are buying e-bikes. People not familiar with cycling in Boston might not know many of the safety basics to keep in mind - such as knowing what to wear, the laws to follow, how to ride a bike safely at night, how to ride defensively, and more.

Currently, there is no specific designation in Massachusetts’ law to regulate e-bikes. There is, however, a “motorized bicycle” definition and regulations - such as needing a license and only being allowed on streets, not other paths. E-bikes don’t have a designation in Massachusetts’ state law and are primarily addressed with mopeds and scooters, leaving questions unanswered when it comes to where e-bikes can and cannot be ridden and more.

If e-bikes were given a specific vehicle classification, it would create more clarity for e-bike retailers, riders, and others who share the roads and paths in Massachusetts.

MassBike suggests legislation, which, among other things, would provide rules and regulations for e-bikes on streets and bicycle paths. Other policy ideas include establishing that low-speed e-bikes be treated like regular bicycles, while high-speed e-bikes have additional safety measures. MassBike recommends lower-speed bikes to be allowed on all paths, trails, and any local off-road and natural surface trails.

If you were injured in a bicycle or e-bike accident, Spada Law Group’s injury attorneys can work to protect your legal rights. We have three offices and proudly serve the entire state with the ability to meet with you remotely from the comfort of your own home. Contact us for a free consultation so we can learn more about your e-bike injury case and see how we can help you get the recovery you deserve after your accident