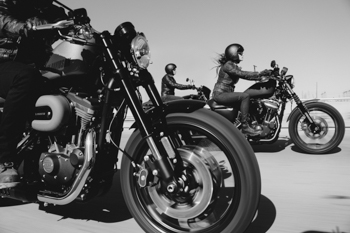 Spirits were high, and attendees seemed thrilled to attend the nation’s oldest rally after a long wait, said Charlie St. Clair, the executive director of the Laconia Motorcycle Week Association. Since its start in 1916, the Laconia Motorcycle Rally has only missed a handful of years due to national and world events.

“I think people’s desire to get out had been impeded by COVID, and everyone, especially those I talked to from Canada, was thrilled to be back out and enjoying the beauty of our region,” said Laconia Mayor Andrew Hosmer.

This year's rally also drew many first-time participants, and many already booked hotel rooms to return next summer. The longstanding history of the event and the different landscapes New Hampshire has to offer, such as riding through quaint New England towns, the mountains, or along the Atlantic coast always draw large crowds. After almost a century, Weirs Beach continues to be the constant home base and heart and soul of the rally year after year. New Hampshire also has the fifth-highest motorcycle registrations per capita in the country.

The rally features events highlighting historical bikes, Harley-Davidson demonstrations, rodeos, and burrito-eating contests. In 2018, New Hampshire's Division of Travel and Tourism estimated the nine-day event brought in about $100 million for the state.

Laconia Motorcycle Week is among the nation's top three most popular motorcycle rallies (along with events in Daytona, Florida, and Sturgis, South Dakota), with more than 1 million combined riders attending the events.

The joyful resurgence of the motorcycle rally also proved deadlier than in past years.

While there was much to celebrate during motorcycle week, there is also reason to mourn.

There was a sharp increase in motorcycle accident-related deaths. There were at least five fatal motorcycle accidents statewide in New Hampshire, and another crash victim was still in critical danger as of June 22. Prior to the rally, there were seven motorcycle fatalities in New Hampshire this year. Sadly, one of these fatal accidents hit home for me, a friend of my wife’s husband was killed and she was critically injured and is still in critical condition as of today (July 14th).

This year was likely the most deadly motorcycle week in more than 25 years. The five fatalities mark the most deaths in a Motorcycle Week that Laconia Police Chief Matthew Canfield has been aware of since he joined the force 26 years ago.

“Each accident had its own story — which could have been prevented,” Cynthia Makris, president of the Laconia Motorcycle Week Association board, told the Laconia Daily Sun. “People need to watch out for motorcycles and riders need to be more careful.”

Police Chief Canfield pleaded for everyone to pay extra attention and stop driving recklessly. He asked drivers to give themselves more time to stop and to look twice for motorcyclists. He also asked motorcyclists to hesitate before riding the line.

Five people died within four days of Laconia’s Motorcycle week, and at least four were seriously injured. “In terms of motorcycle accidents and fatalities, June is our highest month in both of those categories, unfortunately,” said Capt. Chris Vetter with the New Hampshire State Police. Helmets are not required in New Hampshire, but law enforcement still encourages riders to wear them.

More than in past years, there was also an issue with riders performing road stunts and burnout. In addition to crashes and deaths, there also seemed to be an increased intensity among some riders. St. Clair believed that most of the burnouts were unfortunately led by locals. He referred to this as disheartening and disappointing, noting that burnouts, stunts, and overly loud bikes were amateur behaviors.

One potential reason for this change is due to who is attending the rallies. Many of the older riders who have been coming to the rally for years and years are retiring from the event, and younger riders are starting to have a stronger presence at the rally. Younger riders are more likely to race motorcycles and go off-roading with their bikes which can also increase the chances of accidents, injuries, and deaths.

Organizers have started gearing up for the 100th anniversary of motorcycle week in 2023. Laconia Motorcycle Week is scheduled to run from June 10 to June 18, 2023. They expect the anniversary to drive larger crowds and to offer more unique programming.

With the first century of the event coming to a close, organizers are also excited for what the next century will bring. As the oldest motorcycle rally in the nation, Laconia is often a leader in terms of what motorcycle rallies will look like nationwide.

Were You Injured In A Massachusetts Motorcycle Accident? Schedule a FREE Consultation Today

If you’ve been injured in a motorcycle accident, it’s important to remember that you are not automatically at fault. But due to motorcycle bias, you will need to work harder to prove your case and that requires the skill of an experienced motorcycle accident lawyer.

At Spada Law Group, we have helped countless riders obtain the compensation they deserve after being involved in a motorcycle crash. We want to help you too.