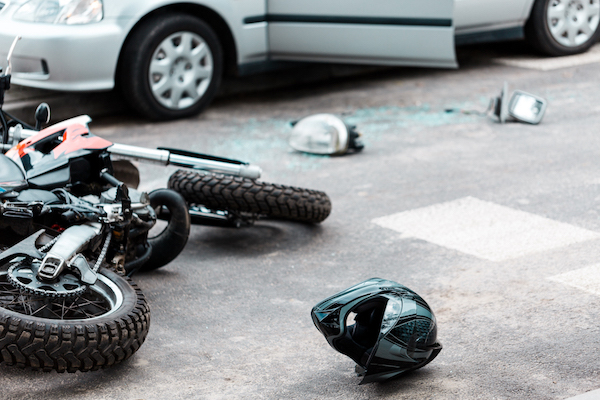 Before his accident, two of Jay’s favorite pastimes were riding his motorcycle and going to the gym. His injury changed this.

It was a late-July morning, and Jay* was enjoying a motorcycle ride through Revere, Massachusetts. All of the sudden, a large construction vehicle - a telehandler - made an un-signaled left turn and completely cut Jay off. The driver turned directly across Jay’s path in his attempt to enter a construction site.

Jay found himself against the telehandler and his foot was crushed between his bike and one of the telehandler’s wheels. The driver stated he didn’t see our client.

Jay was rushed to a local hospital in an ambulance.

As a result of his foot being crushed, Jay now has to live with permanent, life-altering injuries.

As treatment of Jay’s injuries progressed, he continued to experience more pain. He suffered an acute comminuted nondisplaced navicular bone fracture and an impacted distal cuboid fractures at two joints in his foot, as well as a shoulder impingement injury.

He saw an orthopedic specialist, a podiatrist and a physical therapist. His pain still continued after physical therapy treatment and multiple rounds of cortisone shots to treat the pain in his foot. He was in a walking boot until October and only then was able to begin resuming some of his regular activities.

In September, about 14 months after the motorcycle accident, Jay’s podiatrist diagnosed him with post-traumatic osteoarthritis, closed fractures (non-displaced navicular and cuboid bone fractures), an altered gait, and a decreased range of motion. His pain and slight limp were a direct result of his injuries. In addition to his fractures, the podiatrist also found Jay’s lingering pain and altered walking motion had caused him extreme calf muscle tightness and significant left calf atrophy (the progressive degeneration or shrinkage of muscle or nerve tissue) from his motorcycle accident injuries.

“These conditions are not likely to improve over time,” his doctor wrote in a report. “The injuries … have caused permanent impairments. … his condition will continue to affect his quality of life.”

In order to slow the progression of his conditions, Jay was recommended to wear special support shoes, custom-made orthotics and to maintain his overall health for the rest of his life. Jay continues to experience a limited range of motion, a flattened arch in his foot and a significant limp.

Jay is in his mid-40s, working as a full-time, successful Massachusetts realtor. He’s engaged to be married and is also a proficient carpenter. He was healthy, extremely active, regularly went to the gym to lift weights and was in excellent physical condition prior to the motorcycle accident.

Now, Jay can’t strength train in the same way and can’t even lift weights overhead due to his shoulder impingement. He experiences daily pain, limping, and limited mobility in his left foot. He can no longer stand on ladders, squat or kneel down when doing carpentry.

Going to the gym and riding motorcycles were two of Jay’s favorite activities and both have become much less enjoyable for him.

Jay’s career was also affected. A seasoned real estate agent, Jay was unable to work for several months after the accident. In the 6 months after his injury, he was only able to earn about 10% of what he earned in the first 6 months of the year prior to his injury.

Spada Law Group’s injury attorneys were able to get Jay a $225,000 settlement for his motorcycle accident case by proving the construction vehicle driver’s negligence and documenting Jay’s lost earnings capacity.

The telehandler operator failed to signal his left turn before he completely cut Jay off and crushed his foot. The driver also said he did not see Jay on his motorcycle when he made the left turn to enter a construction site.

The driver’s failure to signal his turn is evidence of the driver’s negligence. There was absolutely no evidence that Jay did anything to contribute to the accident, so we were able to prove the sole responsibility of the accident was on the telehandler operator.

Despite the insurance company’s attempt to hold Jay partially responsible for the accident we were able to get Jay the $225,000 settlement for his motorcycle accident at a formal mediation, which meant Jay never had to take his case to court.

Any motorcyclist injured by a careless driver in Massachusetts is entitled to seek financial compensation through an injury lawsuit. Hiring one of Spada Law Group's accident injury attorneys after a motorcycle accident can allow a motorcyclist to pursue damages for medical treatment, repair their motorcycle, and receive compensation for pain and suffering caused by the accident.

If you’ve been injured in a motorcycle accident anywhere in Massachusetts, Spada Law Group can help protect your legal rights and fight for the damages you deserve.

*Jay is not the client's name. Client name was changed for confidentiality.