A Motorcyclist Didn’t Think He Had a Personal Injury Claim After a No Contact Accident. We Got Him $100,000. 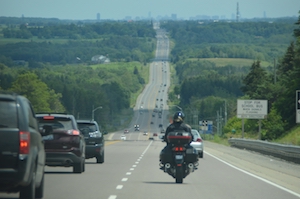 If you are a Massachusetts motorcycle rider, chances are that you’ve been involved in a situation on the road where another driver causes you to react to avoid a crash, or worse, your necessary reaction does cause you to crash.

We recently settled a case involving a no-contact motorcycle accident with serious injuries.

Our client was seriously injured, but he was unaware of his options until a friend told him to consult a personal injury attorney.

The injured motorcyclist had no idea that he had a potential personal injury claim for his accident because he assumed that he had no case since the driver of the car never hit him and never stopped.

Joe was seriously injured as a result of the accident.

His left ankle was dislocated, and he fractured his fibula – a bone in your leg that runs from your knee to your ankle. The fibula is one of three bones that make up the ankle joint. His fractured fibula required an open reduction and internal surgical fixation the next day after his accident. An open reduction and internal fixation surgery is done to stabilize and heal a broken bone. The procedure is common with broken ankles.

Although his injuries were severe and required surgery, Joe never pursued a personal injury claim for his motorcycle accident. He did not think he had an injury claim because the at-fault party never hit him and left the accident scene.

Maximum Recovery: How Spada Law Group Settled The Case For $100,000 in Less than Three Months

For Joe, a simple conversation led to a phone call that made all the difference.

Joe’s friend asked if he’d made an injury claim, to which Joe replied that he hadn’t since the other driver left the accident scene.

Lucky for Joe, his friend was aware that he might still have options and encouraged him to call Attorney Len Spada. Joe’s friend was a former client as well, and Spada Law Group once helped him recover after a hit-and-run accident where the other vehicle had left the scene. He told Joe that Spada Law got him the Uninsured Motorist (UM) coverage he was entitled to due to the accident.

Joe called us just short of two years after his accident. The general personal injury statute of limitations for most cases is three years in Massachusetts.

Because we were able to prove that the accident was someone else’s fault, Joe was able to recover from his own UM policy. In less than three months, Spada Law Group settled Joe’s UM claim and got him the maximum amount available under his insurance policy: $100,000.

Just like Joe had options after his accident, other motorcyclists involved in single-rider accidents also have options. There are ways for motorcyclists to recover money damages for injuries with or without another driver or rider involved.

When another driver doesn’t stay at the scene of the accident, you can pursue a claim for money damages under your bike’s underinsured and uninsured (UM) coverage. As long as you can prove that someone else was at-fault for the crash, even if that person remains unknown, you can recover damages for your injuries from your own insurance policy. This is what we did for Joe and is something we handle all the time.

Any motorcyclist injured by a careless driver in Massachusetts is entitled to seek financial compensation through an injury lawsuit.

Hiring one of Spada Law Group's accident injury attorneys after a motorcycle accident can allow a motorcyclist to pursue damages for medical treatment, repair their motorcycle, and receive compensation for pain and suffering caused by the accident.

If you’ve been injured in a motorcycle accident anywhere in Massachusetts, Spada Law Group can help protect your legal rights and fight for the damages you deserve. We’re here and ready to help.  As personal injury lawyers, you never pay us a penny until we win your case.

We have offices in Chelsea, Peabody, Worcester, and Newburyport, but we proudly serve the entire state and can meet with you remotely from the comfort of your own home. Contact us for a free consultation to see how we can help you get the recovery you deserve after your injury.

*Joe is not the client's name. The client’s name was changed for confidentiality.