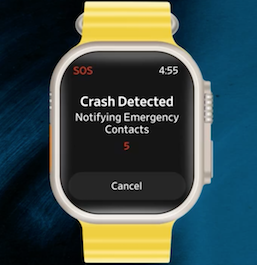 Apple has always been known for offering safety in terms of consumer and user privacy, but the company recently took its commitment to safety to the next level: Apple added automatic crash detection features to new iPhones and Watches.

This new development is a welcome advancement, especially considering that in 2020 alone, there were more than 25,000 car crash fatalities and more than 140,000 severe injuries resulting from car crashes, according to the National Highway Traffic Safety Administration.

The feature can nearly instantly detect collisions with sensor data in the devices. If your device recognizes you were in an accident, your phone or watch will display an onscreen prompt. An Apple Watch, for example, will display something like “Crash Detected: Notifying Emergency Contacts,” and it will feature a 10-second countdown. If you do not cancel the countdown, the device will sound an alarm, automatically call 911 and provide emergency services with your location.

It operates similarly to the once popular OnStar, except that it’s part of your Apple devices, and you don’t need to pay any subscription fees for the service.

Apple’s marketing pitch for the new devices promises that new iPhones and watches can help if you’re involved in a severe crash.

In September, a man was making a left-hand turn in his 2017 Volkswagen Jetta at an intersection in Coopersburg, Pennsylvania. A car came along and smashed into the front of his car, setting off his airbags.

While he was still disoriented from the crash, he heard an SOS siren from his phone and then heard 911 through his phone, which was connected to his car via Bluetooth. His four-day-old iPhone 14 Pro detected the collision and was the first on the scene to call for help.

The man broke his hand, but thankfully the crash was in no way life-threatening.

As personal injury attorneys, we’re thrilled about this new feature and its ability to alert emergency services in the unfortunate event of a serious car crash. If you drive down the bustling streets of Boston, chances are there will be several bystanders and other drivers who will witness a crash and hopefully call 911 for you if they see a severe collision. But a feature like this is especially helpful for drivers in the suburbs and more rural areas of Massachusetts where one of the drivers involved in the accident might be the only person able to call 911.

A feature like this could be a true lifesaver in a serious accident, especially with no other witnesses around at the time of the crash. The sooner 911 can get to the scene of a serious crash, the better. It can truly make all the difference.

What Exactly is a “Severe Crash” That will Trigger the Crash-Detection Feature? Is it Reliable?

An award-winning Wall Street Journal journalist, Joanna Stern, did some test crashes to learn more about how Apple’s crash-detection feature worked and under what circumstances.

Three crashes with two different vehicles were conducted. Of course, the results are anecdotal rather than scientific, but they offer important insights. Overall, the limited tests didn’t necessarily show a lot of consistency and reliability, and the reporters thought there was some discrepancy between which crashes the devices considered “severe” and which it did not.

However, the tests involved one moving vehicle and one parked vehicle. Several indicators usually used by the crash-detection feature were not triggered in the tests.

The iPhone and Apple Watch use a combination of sensors and software algorithms to detect crashes, such as:

A demolition-derby champion driver performed a series of test crashes in a junkyard with two parked passengerless vehicles. The derby driver wore an Apple Watch Ultra on his wrist, and an iPhone 14 (paired with the watch) and a Google Pixel 5 phone were strapped into the car next to him.

In the Taurus, the reporters also strapped in an iPhone 14 Pro Max and a Google Pixel 6.

The driver crashed into the Ford Taurus head-on at about 25mph. After about 5 seconds, the Apple Watch buzzed with an alert. If you have an iPhone paired with a watch, the watch will get the alert since the phone might be out of reach after a car accident.

The driver hit the cancel button on the alert, but had he not hit it within 10 seconds, there would be a loud alarm and then another 10-second count-down until the device calls 911. The Pixel phone, however, did not have a crash alert.

When the reporters reached out to Apple, Apple said that for the crash detection to work correctly, the devices first need to recognize that they are in cars and driving. In the parked Taurus, even though an airbag was deployed and the entire front of the vehicle was smashed, neither the iPhone nor the Pixel alerted to the crash. This is likely due to a few factors. In the Taurus, phones were not connected to CarPlay or Bluetooth, and there weren’t enough other signals to indicate they were in cars – such as not being on a public roadway and not being in motion. The windows were also down on the vehicle, which would mean the barometer couldn’t detect the change in pressure.

A second crash with the same vehicle caused another airbag to deploy, and a bumper flew off the car. This time only the Pixel phone in the derby driver’s car detected a crash, and the iPhone and Apple Watch did not. Again, neither phone in the Taurus detected the crash.

As a second test crash car, the reporters selected a Dodge Caravan. With this test, the van was driven around for a few minutes and then parked (without passengers) to simulate stopping at a red light or stop sign.

The derby driver then crashed into it at about 25mph, just like the Taurus. The windshield shattered and the airbags deployed.

Both phones and the watch in the derby driver’s car detected the crash, but neither phone in the Dodge did. Again, however, in the case of the parked cars, it’s still likely that the phones didn’t have enough indications that they were in a car to have activated the crash-detection feature. Both Google and Apple indicated that for the crash-detection to work, the device must first detect that you’re driving.

Progress is Still Progress When it Comes to Crash Detection

While the crash-detection features in the devices may not be perfect, they are still a welcome development that has the potential to save lives. They may not help in every crash, but the feature certainly doesn’t hurt, especially in a more rural area.

This is a significant development especially given that the roads in Massachusetts are only becoming more dangerous.

Injured In a Car Accident in Massachusetts? Text or Call East Boston Car Accident Injury Attorney For A FREE Consultation

Over the last three decades, we’ve helped thousands of people in Massachusetts get the recovery they need after a car accident injury. Recently, Spada Law Group was recognized as one of the Top 20 Car Accident Attorneys in Boston and Attorney Spada was named one of Boston’s Top Personal Injury Lawyers by Boston Magazine. We’re here and ready to help.  As personal injury lawyers, you never pay us a penny until we win your case.

We have offices in Chelsea, Peabody, Worcester, and Newburyport, but we proudly serve the entire state and can meet with you remotely from the comfort of your own home. Contact us for a free consultation to see how we can help you get the recovery you deserve after your injury.