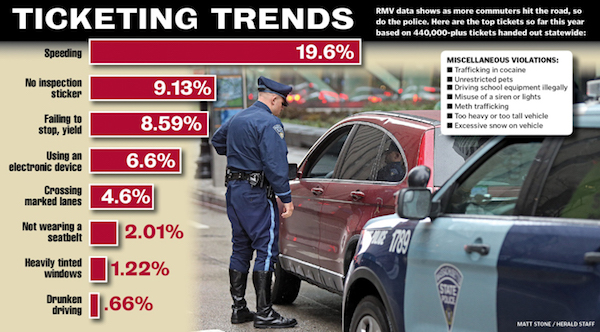 Traffic in Massachusetts has increased rapidly over the past few months. With roads filling up to pre-pandemic levels, police have become more vigilant against dangerous driving habits in Boston and beyond.

“Traffic has gone crazy over the past two months,” said Chelsea Police Chief Brian Kyes, as reported in the Boston Herald. He said the traffic backups happening now are even worse than before the coronavirus pandemic hit. We have an office in Chelsea and can attest to the accuracy of Chief Kyes’ assessment.

Tickets and violations for drivers have also increased. Most dangerously, of the more than 440,000 traffic citations issued, speeding tickets make up nearly 20% of them. That’s nearly 90,000 speeding tickets issued in Massachusetts so far this year. Other tickets for not having a state inspection sticker, failing to stop or yield, and driving while talking on the phone are commonly issued.

Each of these scenarios makes for very dangerous roadways in Massachusetts.

Speeding on roadways puts drivers, passengers, and all others on the road in danger. The faster someone is driving, the less likely they are to be able to slow down, dodge an obstacle in the road, or even survive if they get into a car crash.

The Insurance Institute for Highway Safety (IIHS) reports that even moderate speed increases can result in more fatal accidents. In a study, IIHS found significant differences in car crash effects with varying impact speeds from 40, to 50 and 56mph.

At the 40 mph impact speed, there was only slight intrusion into the driver’s space, while a 50 mph impact caused significant damage and impact to the vehicle. The crash at 56 mph resulted in significant compromises to the interior of the vehicle and the dummy used in the crash registered severe neck injuries and leg fractures.

In both the 50 and 56 mph crashes, the dummy’s head went through the deployed airbag, which can lead to a risk of facial fractures and severe brain injuries.

Risks of Talking on the Phone While Driving

Holding a phone in your hand while driving - or even biking - is illegal in Massachusetts. Phones are only allowed to be used in a “hands-free mode.” Anyone under 18 years old can’t use a phone at all while driving, even if it’s in a hands-free mode. Penalties range from $100 to $500, and if you’re caught a third time you may see increases in your car insurance rates.

When driving 55 mph, sending or reading a text is equivalent to driving the length of a football field with your eyes closed, the CDC reports.

Failing to Stop or Yield While Driving

Failing to stop or yield while driving in Massachusetts, or anywhere, is incredibly dangerous. Not stopping or not yielding when you should increases the risk of car accidents, particularly T-bone accidents at intersections. If failing to obey a traffic sign, stop sign, or yield sign leads to an accident, that behavior is considered a contribution to the crash, which means it’s more likely you will be found at fault for the accident.

With traffic and traffic violations for speeding, phone use, and failure to obey stop and yield signs increasing, the dangers of the roads are also increasing. If you plan to drive in Massachusetts, be extra cautious on the packed roads. Make sure you’re attentive, drive the speed limit, don’t use your phone, and obey traffic signs. These simple things could save a life - yours or someone else’s.

Why Are the Roads so Crowded in Massachusetts?

One of the main contributing factors to the dense roadways is the lack of passengers on the T. Before the pandemic hit, the T had about 1.2 million trips on an average weekday in February 2020, according to the MBTA dashboard.

Now, those numbers are only half as high with closer to 500,000 average weekday trips. While many people are still working from home in Boston and Massachusetts, others are choosing to drive themselves to work instead of cramming into the T or commuter trains. For those who own vehicles, driving may still feel like a safer choice when it comes to staying healthy during the pandemic.

Local police officers report that the hesitancy to take the T and other forms of public transit will only result in continued traffic jams and unsafe road conditions.

Injured in a Massachusetts’ Car Accident? Call or Text Spada Law Group for a Free Consultation

We’ve helped countless people in Massachusetts get the recovery they need after a car accident. Whether you were driving, walking, biking, or on a motorcycle - Spada Law Group’s injury lawyers can help if you were injured in an accident.