Can Airbags Cause Injuries in a Car Accident? 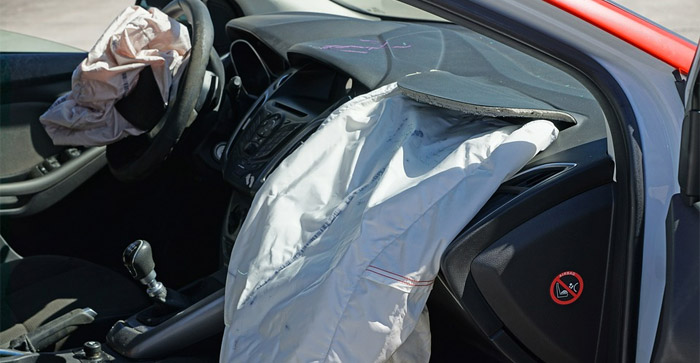 When deployed correctly, airbags provide crucial cushioning for drivers and passengers during a crash and can reduce the risk of serious injuries and life-threatening conditions in the event of a car accident. Unfortunately, airbags themselves can sometimes be the cause of an injury. If you’ve been injured by an airbag, regardless of whether or not the airbag was faulty, you may be entitled to compensation. A Massachusetts car accident attorney can investigate the matter to determine if you have a personal injury claim for the airbag accident.

How Can an Airbag be the Cause of an Injury?

The airbag is a device developed for our safety and protection, but it has also been responsible for many severe and immobilizing injuries including whiplash injuries, traumatic brain injuries, and neck and spine injuries. Airbags deploy at speeds of roughly 100 mph. When something hits you at that speed, it results in a serious impact to your body. Sometimes, a defective airbag deploys much later than it should because of a sensor or mechanical problem. If your body has been shifted forward so that you are too close to the airbag, you could be injured. The chemicals that are used to deploy the airbags have also been known to cause injuries in some cases.
Most Common Causes of Airbag Injuries

Face – Your face is one of the first parts of the body to come in contact with the airbag and has the momentum to be impacted the hardest. The main purpose of the frontal airbag is to prevent your face and head from colliding with your dashboard or windshield. While your airbag may succeed in preventing this, your face may be struck with the force of the airbag. The force of the airbag being deployed can damage your jaw, nose and eyes. Broken bones in the face and permanent scarring can be the result of airbag deployment. In some cases, eye injuries were severe enough to result in temporary or permanent blindness.

Chest – To stop your body from being thrown out of the front seat of the car, an airbag has to come out fast. After the airbag bursts from the steering wheel and collides with your forward-moving body, your chest area is open to injury. Many drivers have endured broken bones in their chest, and damage to soft tissue.

Burn and Laceration Injuries – The speed at which airbag deploys can cause abrasions or burns. The face and arms are particularly vulnerable to getting burned. Another cause of burns is chemical and usually attributed to sodium hydroxide in the aerosol created during the deployment of the airbag. Direct thermal burns from high-temperature gases or indirect injuries due to the melting of clothing, as well as friction burns from physical contact are possible. During the deployment of a faulty airbag, metal fragments/shards could be projected throughout the vehicle and toward occupants resulting in serious lacerations and even death.

Internal Injuries – The chemicals released upon deployment can induce asthma attacks to those suffering from asthma.

Can You Prevent Airbag Injuries in a Car Accident?

You can take some steps to decrease the chance that you will be injured if an airbag deploys during a car accident.

Defective airbags are another source of injuries in car accidents. Takata airbags have been linked to numerous injuries and deaths in the United States. Vehicles made by 19 different automakers have been recalled to replace frontal airbags on the driver’s side or passenger’s side, or both in what the National Highway Traffic Safety Administration has called “the largest and most complex safety recall in U.S. history.” The airbags, made by major parts supplier Takata, were mostly installed in cars from model year 2002 through 2015. Some of those airbags could deploy explosively, injuring or even killing car occupants. To date, there have been 16 deaths in the United States attributed to these faulty airbags.

At the heart of the problem is the airbag’s inflator, a metal cartridge loaded with propellant wafers, which in some cases has ignited with explosive force. If the inflator housing ruptures in a crash, metal shards from the airbag can be sprayed throughout the passenger cabin—a potentially disastrous outcome from a supposedly life-saving device.
If you believe you suffered an airbag injury, you should seek immediate medical attention. You should also preserve all pieces of the airbag and try to retain possession of your vehicle until you can consult with a Massachusetts car accident lawyer. With offices in Chelsea and Salem, MA, Spada Law Group provides Boston quality legal representation without the commute into the city with free on-premises or validated parking. We are here to answer any questions you may have. Call Spada Law Group today at 617-889-5000 to discuss your situation. The consultation is free and there is absolutely no obligation to hire us. We are open Monday through Friday from 9am to 5pm.

1 Comments
hi yes i agree with you but 99% accident were not fatal due to air bags. thanks for sharing valuable tips..
by john November 1, 2022 at 03:20 PM
Post a Comment