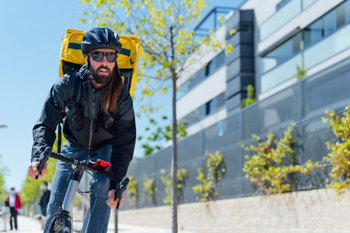 The city of Boston has committed to providing resources to eliminate severe and deadly traffic crashes in the city by 2030. A large part of this effort involves making Boston’s streets safer for pedestrians and cyclists. Most trips in the city of Boston are made by people on foot, by bike, or through public transportation.

In Vision Zero Fatality Records, eight bicyclist deaths were reported from 2015 to 2022.

In 2015, three fatal bike accidents took place in June, May, and August. The May and August bike accidents each occurred at intersections. One casualty was at New England Avenue and Talbot Avenue, and the other was at Beacon Street and Massachusetts Avenue. The June bike accident occurred on Selden Street, near Lena Terrace and Wooddale Avenue.

In 2016, there was one deadly bike accident on Cambridge Street near Dustin Street in November.

In 2017, there were two fatal bike accidents. One deadly accident was in April at the intersection of Clarendon Street and Commonwealth Avenue, and the other in November on Cottage Street near Robey Street and Norfolk Avenue.

Vision Zero is Boston’s plan to eliminate fatal and severe crashes, including bike accidents, in Boston by 2030. The program was announced in 2015 by former Mayor Marty Walsh.

If you visit the city’s Zero Boston webpage, you will find several helpful resources and data reports. For example, there is an interactive “Safety Concerns Map” on the page where people - including you - can select a location and tell the city about your safety concern. There is also an “Injury Crash Map” that illustrates the reported crashes in Boston.

Here is a snapshot of the crash map. The orange dots mark the locations of bicycle crashes this year. If you click on any of the dots, they will tell you how many crashes are in that location, and what date the collision took place. 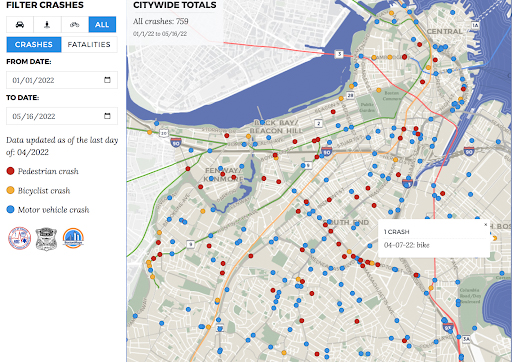 In another map created based on data from 2015 to 2017, Boston identified the most dangerous intersections for bicyclists.

The 5 most dangerous intersections based on bike crash data in Boston:

Four of the five most common places for bike crashes in Boston are along Massachusetts Avenue. You can find an interactive map version of crash data here.

Changes Boston is Making for Safer Cycling on the Streets:

Boston’s extensive network of conventional bike lanes dedicates about 5 feet of space in the street for cyclists. The addition of more bike lanes in the city has led to more people biking to work, to the T, to run errands, and for recreation.

Because many people don’t feel safe in traditional bike lanes, Boston is creating more bike routes with separation between drivers and bicyclists. The city is also working to calm traffic on local streets to improve safety.

There are more than 20 projects in the works to increase safety for cyclists in Boston.

How YOU can Help Make Massachusetts Streets Safer for Cyclists

Two important ways drivers can help keep cyclists safe is by watching their speed in the city and coming to a complete stop at yellow and red lights. Speeding and running red lights are two of the most dangerous driving behaviors in the city, according to LivableStreets.

The new 25mph speed limit in Boston was set based on data that show when a driver is traveling at or below 25mph, someone is far less likely to be severely injured or killed in a traffic crash - whether walking, driving, or bicycling.

If a pedestrian is hit by a driver traveling at 30mph, there is a 47% chance they’ll be seriously injured or killed. At 25mph, the possibility of being killed in an accident drops to 12%.

As cyclists ourselves, we know the joy that cycling brings. But as injury attorneys, we also know about the dangers of cycling in Boston and beyond with less-than-friendly Massachusetts drivers.

If you were injured in a bicycle or e-bike accident, Spada Law Group’s injury attorneys can work to protect your legal rights. We have three offices but proudly serve the entire state with the ability to meet with you remotely from the comfort of your own home. Contact us for a free consultation so we can learn more about your bike or e-bike injury case and see how we can help you get the recovery you deserve after your accident.