What Happens If I am Hit by a Car Crossing the Street in Boston?

Pedestrian accidents have become a serious problem not only in Massachusetts, but nationwide. The number of pedestrians killed in accidents is on the rise over the last several years. It comes as no surprise that studies have shown that cell phone use by both drivers and pedestrians is a major contributing factor for this terrible trend. It seems everyone has their heads down staring into their “smartphones” these days. I confess, I am occasionally guilty myself. Another factor is the increase in popularity of Sport Utility Vehicles (SUVs). Due to a SUV’s greater physical size and taller front ends, impacts with pedestrians are more likely to cause serious head injuries and death as opposed to leg injuries when a car is involved. 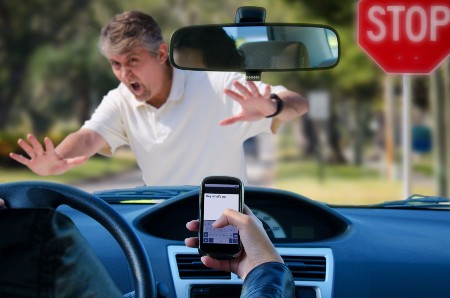 We have represented many pedestrians seriously injured after being struck by cars, trucks and SUV’s. In several cases the causes of the collisions have involved factors such as:

There are several laws in Massachusetts meant to protect people when crossing roads or intersections. Massachusetts General Law Chapters 89§11 says that the pedestrian has the right of way when in a crosswalk and approaching vehicles must slow down and yield their right of way.

What If You’re Not in A Crosswalk When You Get Hit?

But what if someone is NOT in a crosswalk and gets hit? How does this fact affect a person’s right to seek compensation for their injuries? Who is at fault in this situation? These are questions we get from clients all the time. The answers differ based on the facts of each case, but I will attempt to simplify the analysis.

First, let me begin by quoting a Massachusetts Judge who presided over a case we tried several months ago as she was instructing the jury on the law in Massachusetts as it relates to this very issue:

“The rights and duties of a pedestrian and the operator of a motor vehicle in the use of public ways are reciprocal and each may rely to some extent on the other using proper care. Pedestrians have a duty to exercise due care in their use of public ways. Due care requires that the plaintiff exercise the care and caution which you would naturally expect from a reasonably prudent person under the same or similar circumstances. Further, a pedestrian has a right to cross a street while not in a crosswalk but must do so using due care.”

So, you see, just because someone crosses a street outside of a crosswalk does NOT automatically prevent them from successfully claiming and recovering their damages in a personal injury claim. The law requires a deeper examination into the circumstances of the accident for an answer to who was at fault and to what degree each party is responsible. Being outside of a crosswalk is simply one factor to consider.

An example to illustrate this point is in order. Let’s say a person decides to cross a street outside of a crosswalk. They step from a curb, look both ways, see no traffic on the street they intend to cross and deem it safe to cross. As they get 10 feet into the street, a driver in a car taking a left hand turn onto the street they are crossing fails to look to his left before completing his turn and hits the pedestrian in the middle of the street. In this example, there is a good chance (assuming you can prove the facts I have presented) that the driver of the car will be determined to be 50% or more at fault and the pedestrian will recover at least part of their damages. Why? Because the pedestrian took due care to ensure no vehicles were on the street. The driver in contrast failed to exercise due care by not looking where he was driving. However, because the pedestrian was not in a crosswalk he or she MAY be determined to be partially at fault for their own injuries. The driver could argue that since he knew there was no crosswalk in that area, he had no reasonable expectation that someone would be crossing there. Is that a good argument? I don’t think so, but a jury or insurance company may and that is what truly matters. Both the driver and the pedestrian are legally permitted to rely on the other to exercise due care. The driver can reasonably expect that someone wouldn’t just run out into moving traffic. The pedestrian can reasonably rely on the driver to look where they are going etc.

The point of the above example is to make clear that if you are injured as a pedestrian you should NEVER try to asses the “who’s fault was it?” question WITHOUT first consulting with an experienced personal injury lawyer. Their experience may shed light on facts and arguments you might not have considered. Often when we handle pedestrian cases we need to promptly investigate the accident scene, find and speak to witnesses, obtain video surveillance from cities, towns or private businesses and hire accident reconstruction engineers to quickly establish and support our client’s case. Pedestrian accidents can be complicated and for that reason people injured in such an accident should get an experienced injury lawyer involved as soon as possible. Prompt and thorough investigation and preparation is the key to successfully pursuing such cases.

Based on common sense and my 22 years of representing people who have been hurt or killed in pedestrian accidents, the following are my best tips for staying safe crossing the streets of Boston and surrounding cities:

A Summary of What You May Be Entitled to Recover if You Were Hit by A Car Crossing the Street?

What You Should Do if You Have Been Injured in a Pedestrian Accident?

Get good advice as soon as possible. Pedestrian accidents are among the most serious cases we see. They almost always result in serious injuries or even death. The best thing you can do if you are injured in a pedestrian accident and want to be fairly compensated is to understand your legal rights before you make any decisions. Before you speak to an insurance company adjuster, sign or submit any paperwork or hire a lawyer, you owe it to yourself to get as much information as you can, so you can make a smart decision on what you need to do next. At Spada Law Group, we offer free consumer guides and videos that answer many of the questions car accident victims have. Take a look, download our free information or contact us for a free consultation. Learn what Spada Law Group is all about and how we might be the right personal injury lawyers for you.