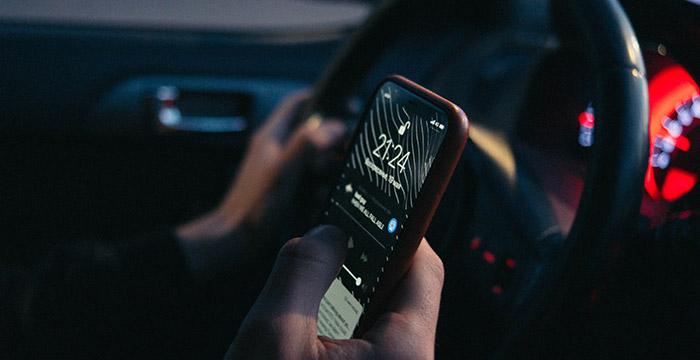 If you’ve visited our personal injury law blog in the past, you may have read about the dangers of driving distracted. Distracted driving has become an epidemic in this country. Distracted driving is defined as anything that takes attention away from safely operating your vehicle.

It used to be that eating, drinking, applying makeup, fixing one’s hair, and tuning the radio were the main causes. Today, cell phones are on top of the list. It’s not surprising given the amount of time we spend on the phones every day checking our social media accounts, reading and responding to text messages and emails. Many of us are even using our mobile phones as the source for music to play through our car’s audio system.

These distractions are not only coming from our personal life. Our professional life can also be demanding to where we feel pressure to respond to work-related messages while driving. The simple fact is, if you aren’t giving your full attention to the road, the cars around you, and the speed limit, you are driving distracted.

Lawmakers in Massachusetts have taken action in an attempt to mitigate driver distraction.

Back in June, the Massachusetts State Senate unanimously passed an Act Preventing Distracted Driving, which would prohibit the use of handheld mobile devices while driving. Passage of this bill puts Massachusetts in line with the northeastern states of Connecticut, New Hampshire, and New York who already have, and enforce a hands-free driving law.
There have been variations of the law proposed and filed over the last 15 years, however, the key holdup has been over concerns the legislation would increase racial profiling by police. Some lawmakers said such a law could increase the number of traffic stops of black and Hispanic drivers. The Senate bill would require police to record the “perceived race and ethnicity” of each driver who is stopped while the House version of the bill would require officers to record the data only when a warning or citation is issued. The Senate bill also requires drivers to take a class after a second offense of the new provision and categorizes third and subsequent violations as surchargeable offenses for insurance, both points that the House did not include.

It Is Already Illegal to Text and Drive in Massachusetts

Massachusetts banned texting while driving in 2010, and prohibits all cell phone use by junior drivers under the age of 18. This new hands-free-driving law would ban the use of all hand-held devices by drivers, except when the device requires a “single tap or swipe” to switch to hands-free mode. Violations of the new law call for fines of $100 for the first offense, $250 for a second offense, then doubling to $500 if a driver is caught three times or more. A ticket would not result in an insurance surcharge. In the bill, offenders would be provided a grace period of sorts, as police would be allowed to issue only warnings until Jan. 1, 2020, after which fines could be levied.
The bill has yet to be voted into law, with lawmakers breaking for the traditional August recess after a marathon session on July 31st that ran past midnight only to hit a stalemate. Lawmakers are expecting the final version of the bill to be voted into law in September.

If you’ve been injured in by a distracted driver in Massachusetts, you deserve to speak with a lawyer who has the experience to get the compensation that you deserve. Here at Spada Law Group, our personal injury attorneys and case managers have experience working in the insurance industry, which gives us a truly unique advantage when fighting on your behalf.