Riding While High: What You Need to Know About Motorcycle Safety and Marijuana Use in Massachusetts 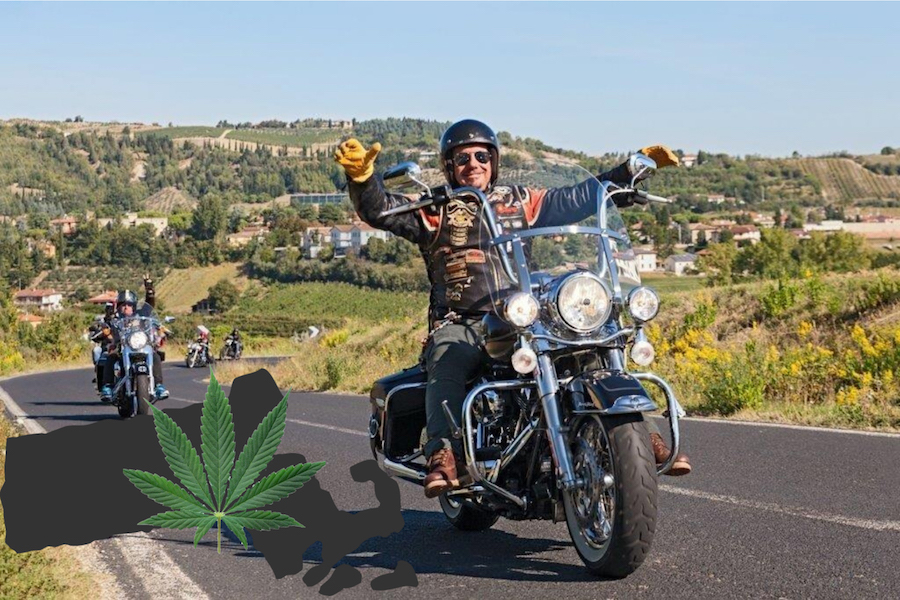 While Massachusetts’ laws regarding marijuana have changed dramatically since the 1980s, there are important things to be aware of when it comes to marijunana use as a biker. Today, it’s not so much about the marijuana, but instead is all about the safety of the motorcyclist.

Marijuana Laws in Massachusetts: What Motorcyclists Should Know

In order to purchase and use marijuana legally, you need to be over 21 years old but you don’t have to be a Massachusetts resident. You’re allowed to possess up to 1 ounce of weed, give up to 1 ounce of weed to another person, and can possess up to 5 grams of marijuna concentrate when you’re outside of your home. Using marijuana in public isn’t allowed, and all “no smoking” zones also apply to smoking marijuana.

In 2019, the global cannabis industry was estimated to be worth around $1.7 billion and Forbes estimates it will hit $32.4 billion in 2021. Other studies estimate that it will be worth $97.35 billion by 2026. With the rapid growth of the industry, we may come to see additional laws in the future regarding Marijuana.

Can I have Marijuana with me on my Motorcycle?

Because you can possess up to 1 ounce of marijuana on your person when you’re away from home, this also applies to when you’re on your bike. The marijuana or marijuana product needs to be in a sealed container, however, or otherwise secured in a separate compartment.

Driving while stoned however- whether on a motorcycle or while operating a car - is obviously illegal in Massachusetts.

Is it Illegal to Smoke or Use Marijuana then Ride my Motorcycle?

In a sense, marijuana use can be equated to drinking and operating a motorcycle.

Drinking, then driving itself is not illegal in Massachusetts. What is illegal is driving “while under the influence of intoxicating liquor, or of marijuana, narcotic drugs, depressants or stimulant substances,” according to state law.

Here is where things can get tricky. If you are someone who drinks alcohol, there is a good chance you have been drinking socially for many years.

You likely know exactly how that glass of wine with dinner, the cocktail out with friends, or the 2 Bud Lights you had at the game will affect you. You likely know how the alcohol will make you feel, react and behave. You might even have a good idea of what your tolerance level is, and the pace you need to drink or the amount of time you need to wait to ensure that you’re not driving while buzzed or more precisely, operating under the influence of alcohol.

You may not have that kind of reliability or relationship with marijuana yet - and you may never be able to for a variety of reasons. For example, alcohol products are very explicit in terms of the amounts of alcohol you’re consuming, the ABV (alcohol by volume) and the proof if it is a hard liquor.

If you have a standard beer, for example, most likely the serving is 12 ounces if it’s a can or a bottle, or 16 ounces if it’s a pint glass. Every beer has a known ABV, so you know how strong it is. Many beers are in the 4-7% range for ABV, while some craft beers can be higher. But a Bud Light is always the same ABV every time etc.

These kinds of metrics which are available with alcohol - such as the amount of consumption, and the strength of what you’re consuming - are not available when it comes to marijuana. Sure, today’s dispensary purchased cannabis product does come with THC level information but the levels vary widely by strain and there is no uniformity of level by product. What you purchase in August might be dramatically different in THC level than what you purchased in July etc. Also, drinking 12 ounces is easy to quantify. How you behave after one or two beers is a repeatable and quantifiable experience. But with cannabis, you may smoke “a little” or a “lot” of a rolled joint or you may have eaten a “bit” too much of an edible. You get my point, it is easier to accidentally get too high than it is to get too drunk.

Marijuana’s Effects on a Person are Less Dependable, for Many Reasons Outside the Person’s Control

While you may feel that you have a pretty good gauge of how marijuana affects you, your state of mind and body - there are a number of factors outside of your control that are important to consider if you’re considering using marijuana and then riding your motorcycle.

The American Motorcycle Safety Foundation (MSF) reported marijuana “tends to distort perception of time, space, and speed” which makes marijuana use dangerous for riders. And, as mentioned before, it is illegal to operate a motorcycle while high in any state.

Possible side effects of marijuana include:

The above side effects can be especially dangerous for motorcyclists. When you’re a biker, having proper reaction times, perceptions, and ability to make quick decisions and reactions can literally save your life. If you’re under the influence of marijuana when you ride - you are putting yourself at a far greater risk for an accident.

In a study conducted by MSF and VirginiaTech’s Transportation Institute, they compiled a list of factors that increase the risk of a crash or a near crash after observing 100 riders for more than 360,000 miles collectively. Of the 12 most common variables that increase the risk of a crash, 3 of them are related to rider behavior. These three factors are: aggressive riding; lack of knowledge, skill, or inattention; and a combination of any of those behaviors. Marijuana use has the ability to contribute to inattention and skill.

As any biker knows, motorcycles are one of the most vulnerable (and fun) ways to travel our roads and highways. One of the best ways to ensure that you are safe and to prepare for a safe motorcycle ride is by ensuring that you are doing everything in your control to reduce the risk of an accident.

Even if you are an experienced consumer of weed and feel like you have a good grasp on how cannabis affects you, just be aware that there are inconsistencies with the strains and potencies which could in turn affect you differently from one time to another.

As Massachusetts Motorcycle Accident Attorneys, our best advice is if you enjoy weed, ride first THEN get high, not the other way around. We see too much suffering caused by accidents and most times it's not the bikers who are at fault, it's the drivers of cars, trucks etc. So since we know you have to be EXTRA cautious due to inattentive drivers, it makes sense to be EXTRA alert, perceptive and have your reaction time be as good as possible. So take a beautiful ride then you can let your guard down somewhere safe.

For more general safety information before a ride, check out our Massachusetts Motorcycle Riding Safety Checklists.

If you were injured in a motorcycle accident anywhere in Massachusetts, Spada Law Group’s injury attorneys can work to protect your legal rights. We have offices in Chelsea, Salem, and Worcester but we proudly serve the entire state and can meet with you remotely from the comfort of your own home. Contact us for a free consultation so we can learn more about your case and see how we can help you get the recovery you deserve after your accident.